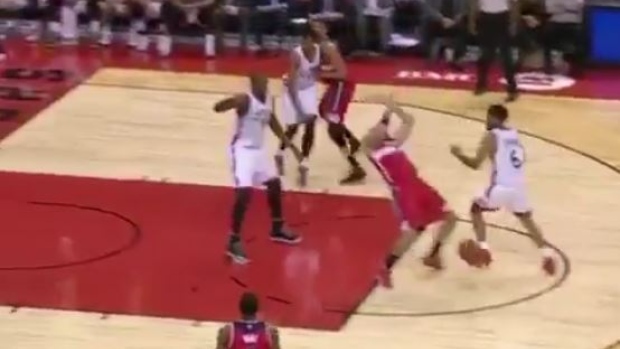 The Washington Wizards were in Toronto for a date with the Raptors on Wednesday night and they were looking to earn their first regular win against the Raptors in more than three years. The game was still up for grabs after one quarter, as Toronto led 26-24. However, the Wizards went on to outscore the Raps 58-34 over the next two quarters and went on to win 105-96.

However, despite getting their first regular season victory over Toronto since February 27, 2014, the Wizards made their own share of errors throughout the game. John Wall’s 13 assists on the night were a game-high and were two more than the Raptors had as a whole, but just because he led the way in assists on Wednesday night, doesn’t mean all his passes were entirely accurate.

As Wall attempted the quick pass to Markieff Morris under the basket, he ended up getting a little bit of tunnel vision as he didn't end up seeing Marcin Gortat standing in the way. The Wizards big man ended up getting smashed in the face by Wall’s pass attempt and went down in a hurry.

Gortat on the John Wall pass that hit him in the face: "they call this doo doo happen" pic.twitter.com/Xj3AknPzkJ