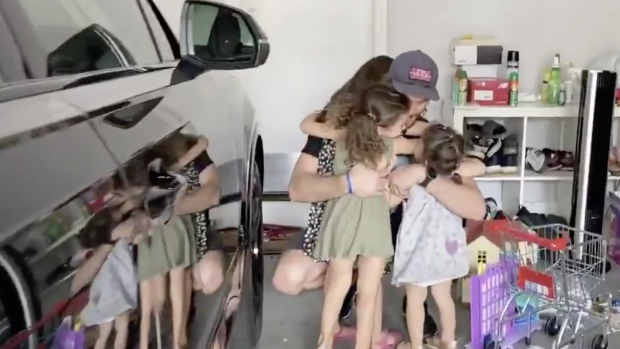 Jon Merrill surprised his daughters returning home after the Vegas Golden Knights lost to the Dallas Stars in the Western Conference Finals.

Due to the coronavirus pandemic and the request for the return of sports, the NHL came up with the solution to create a bubble in which players and organizations would be houses for the entirety of the playoffs with no physical contact to the outside world.

Unfortunately, that meant being away from their families for an extended period of time, the further you went in the longer you were away. For the Vegas Golden Knights, who made it to the Western Conference finals, that meant a few months.

The loss is bitter sweet, on one had that meant he didn't advance to the Stanley Cup final, on the other hand Merrill was able to return home to his wife and 3 daughters.

I told the girls we had a big surprise.. little did they know Daddy was home from the @NHLbubble ❤️ pic.twitter.com/sztth8Bo3i


You can hear one of his daughters asking if he won the game, he responds "no, but I came home." Just the sweetest moment!