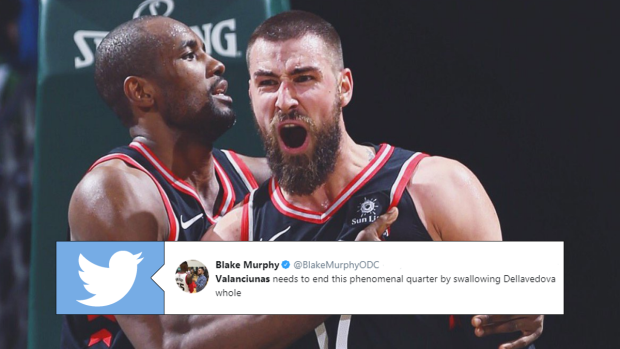 Jonas Valanciunas isn’t always the most consistent player. He has spent a lot of time on the bench during clutch moments over the past few years and isn’t always the easiest to trust. Despite the setbacks, there is no doubt that he is capable of being a dominant force in the league – and sometimes he shows it in a big way.

The Raptors strolled into Milwaukee riding a three game win streak and got off to a good start. While they outscored the Bucks 33-24 in the first quarter, Valanciunas didn’t have quite as great of a start. He picked up two fouls in under two minutes of court time, relegating him to the bench for almost all of the first half.

It was after half when Valanciunas absolutely took over the game.

The 3rd quarter saw the Raps outscore Milwaukee 43-19, while out rebounding 18-3. Valanciunas led the way with a remarkable 20 points and 9 boards in the frame. In case you didn’t notice, that means that he single-handedly outscored and outrebounded the Bucks in the quarter. According to Elias Sports Bureau, it’s the first time that this feat has been accomplished in almost five years.

Jonas Valanciunas (@Raptors) became the first player to outscore and out-rebound the opposing team in a quarter in nearly 5 years (from @EliasSports)#EliasSays: https://t.co/pWVtVMCnCE pic.twitter.com/qFb8ByaitR

The accomplishment comes as a result of a bad quarter by the opposition in both Scola and Valanciunas’ case, but hey – that means good defence too, right?

May very well be the best quarter Jonas Valanciunas has ever played.