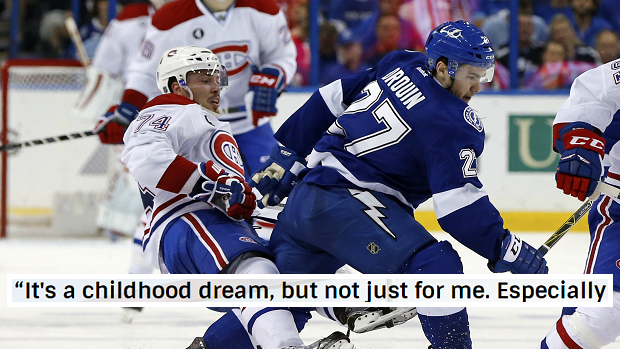 Jonathan Drouin already had the job of most kids’ dreams, but this summer he got the job of his childhood dreams: Playing for the Montreal Canadiens.

Of course, any kid with NHL aspirations will more than likely be okay with playing on any team, but this one is a little different for Drouin. He grew up in Quebec and actually rooted for the crest he’ll wear on the front of his jersey for most of his life. It wasn’t just him though, his dad also rooted for the Habs and his fandom is part of what makes playing for his childhood team so great.

He told this to NHL.com’s Hugo Fontaine:

"’It's a big change for everyone: my friends, my family, but especially my parents. They're really happy about it. It's fun for them too,’ continued the Habs' new No. 92. ‘They'll be able to just take a 90-minute drive to see me play, instead of a four- or five-hour plane ride. It's a childhood dream, but not just for me.

Especially for my dad, because his son will be playing for the Canadiens.’"

That means Drouin will have many more familiar faces in front of him on a nightly basis.

Things like this will also endear him to the unfamiliar Canadiens fans as well. Just look back at the eruption when the NHL draft was held in Montreal and the team selected French Canadian Louis Leblanc. Every city loves a local kid.

Drouin speaks French, cheered for the team growing up and has the skill to attract people of all kind from the Habs’ fan base. Some are already buying up those new number 92 jerseys.

I told y'all I had to do it. My first Habs player shirt since I think Pacioretty 5 years ago. Welcome to the Mecca, Jonathan Drouin ⭐️ pic.twitter.com/tV9oINp3sP