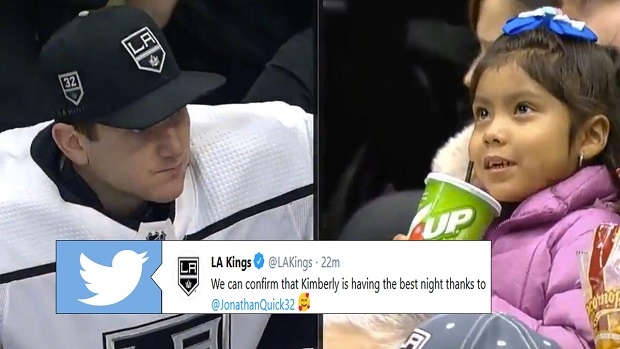 It’s been a rough season so far for Jonathan Quick and the Los Angeles Kings.

Heading into Monday night’s game against the Anaheim Ducks, the Kings sat dead last in the Western Conference with 24 points in 27 games, with Quick rocking a 7-10-1 record to go with a 3.36 goals against average and an .882 save percentage.

Even though Quick didn’t get the start on Monday, the two-time Stanley Cup champion managed to put a smile on the face of a young fan from his spot on the bench.

Quick noticed the young fan, Kimberly, get hit by a puck as the puck flew into the crowd, so he stepped up to try to make her night a little better by signing a puck and sending it to her in her seat, and it certainly worked.

We can confirm that Kimberly is having the best night thanks to @JonathanQuick32 🥰#GoKingsGo pic.twitter.com/7SooNk003N

It might not be a season to write home about, but that moment certainly is.