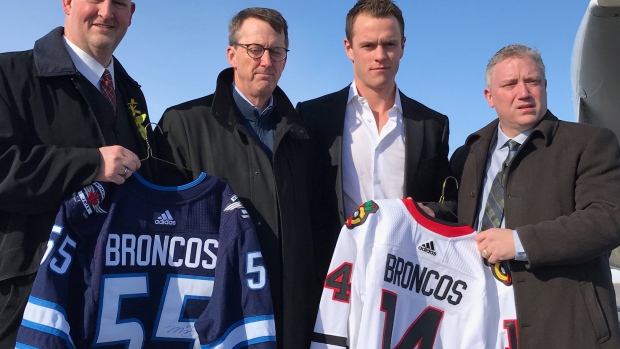 In the aftermath of last week’s Humboldt bus crash that tragically killed 16 people including members of the Saskatchewan Junior Hockey League’s Broncos, the Chicago Blackhawks and Winnipeg Jets played an April 7th game with ‘BRONCOS’ nameplates on the back of their jersey to honor the victims.

On Friday, Blackhawks captain Jonathan Toews was on hand as the game-worn jerseys were delivered to the Humboldt Broncos team. He was joined by Winnipeg Jets executive Mark Chipman, who first had the idea of replacing player nameplates with the Broncos team name.

NHL Jerseys for #BroncosStrong @JonathanToews and @NHLJets Winnipeg exec chairman Mark Chipman who came up with the idea for the Broncos names on back of jerseys last Saturday night. Invited by family to be at funeral for Jacob Leicht one of 3 funerals today. @CBCNews pic.twitter.com/lyIucpi6Io

The jersey delivery is just the latest in many examples of outreach from the hockey community, both financial and symbolic, to the Humboldt victims. The involvement of NHL teams and players throughout this incident has been high and consistently so, which goes to show how gripping it has been for many of the people around the league.

“It's not hard to put yourself in that spot because ... you've been in that position for so many hours throughout your hockey career,” Toews told CBC.

While every team in the NHL participated in a moment of silence for the Humboldt victims, the Jets and Blackhawks were particularly notable for, of course, playing with the team’s name of their backs. They also formed a circle around center ice, which produced this moment of touching imagery:

Tonight we play for the name on our back.

As a reminder, you can still give to the Humboldt players and families at their GoFundMe page, which eclipsed $10 million on Thursday.