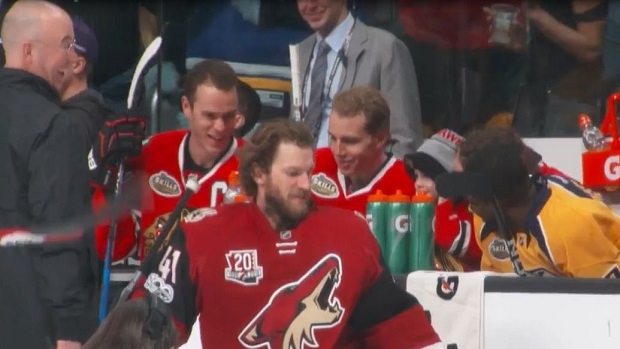 Jonathan Toews and Patrick Kane have been teammates for nearly a decade. They both joined the Chicago Blackhawks ahead of the 2007-08 campaign and the rest is pretty much history. The two can certainly play very well together, and part of that has to do with their relationship off the ice.

Kane and Toews have become best buds over the years. After all, they are both the face of the organization and are two of the core pieces the team plans to keep together during their prime, and possibly for their entire NHL careers.

Despite only posting 28 points in 42 games this season, Toews didn’t really feel like he deserved to be an All-Star this season. However, he’s in Los Angeles for the NHL All-Star Game, and he’s enjoying every moment of it. Ahead of Sunday’s event, the Blackhawks captain pranked his teammate with the classic water bottle prank, only he exchanged the water for a Gatorade bottle.

Kane didn’t even realize he was spilling all over himself until his teammate had a good laugh and looked at his jersey. You don’t even need Toews to admit that it was him because you knew right from the get-go that he had something to do with it.