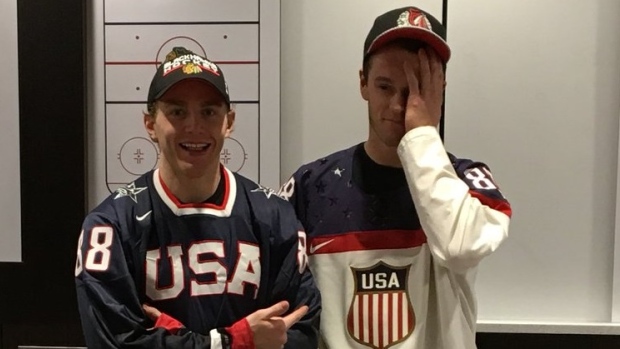 A lot of friendly bets were made between NHL players ahead of the 2017 IIHF World Juniors gold medal game between Team Canada and Team USA. Some players had money on the game, while others made friendly bets involving coffee and hockey equipment. Chicago Blackhawks Jonathan Toews and Patrick Kane were just two of many professional players who took part in a friendly wager.

The fans are in for a treat tomorrow @JonathanToews

The two pulled a Dwyane Wade and LeBron James and made a bet where the player from the losing side had to rock the winning team’s uniform.

@dwyanewade enjoys seeing @kingjames being a man of his word!

Of course, with USA defeating Canada in the shootout, Toews was on the losing side of the bet and came through on Sunday night.

Big win tonight. Big win by USA world juniors too. Now we all get to see @JonathanToews pay up pic.twitter.com/Aq5XlyWtfa

We’re going to be the first to say that Toews does not suit blue and should stick to the red and white. However, a bet is a bet and we can respect a man for staying true to his word.