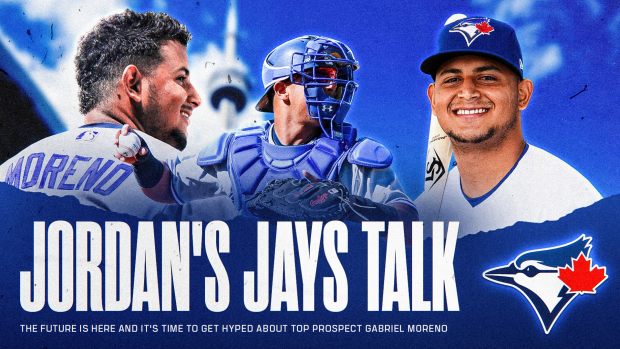 MLB's No. 4 prospect Gabriel Moreno is set to make his debut with the Blue Jays

With series’ set against all four AL East rivals over the next few weeks, emotions are uneasy for Blue Jays fans.

And I think it’s safe to say it’s a mix between excitement and tension.

Well Jays fans, the emotions will only continue to rise. News broke Wednesday evening that Blue Jays top prospect C Gabriel Moreno has been called up and will make his MLB debut against the Detroit Tigers this week. Moreno is ranked as the No. 4 overall prospect in Major League Baseball.

REPORT: The Toronto Blue Jays activate No. 1 prospect Gabriel Moreno during series against the Detroit Tigers

Within 35 appearances this season for the Buffalo Bisons, he’s hitting .323 with 1 HR and 23 RBIs.

Carrying three catchers (Kirk, Collins and Moreno) is wild to me but I’m intrigued. I’m also pretty positive Moreno has practiced a bit of third recently though, so not sure if the team will capitalize on that as well? WHOMS KNOWS.

Carrying 3 catchers isn’t exactly uncommon, but it sure does feel like an interesting move at this point in the season. With Danny Jansen out currently on the 10-day injured list due to a fractured bone in his left hand, the Jays have Alejandro Kirk, Zack Collins and now Moreno on the roster.

Could it be possible that the Jays are aiming to transition Kirk from behind the plate to a more permanent DH role?

Another important piece of information to note is that Gabriel Moreno has professionally played at third base on numerous occasions. Maybe the Jays are looking to give Matt Chapman some rest through the dog days of the summer.

I’m intrigued to see how Moreno’s future with the Blue Jays unfolds and even more excited to see the current Jays team compete for a spot in the postseason.

Gabriel Moreno capped a four-hit game for the @BuffaloBisons in an electric way 🎉 pic.twitter.com/oy0AVdtMti

In the meantime though, make sure you cast those All-Star ballot votes in and remember, no ballot is legit unless it includes Alejandro Kirk.

no All-Star ballot is valid if it doesn't have Alejandro Kirk.