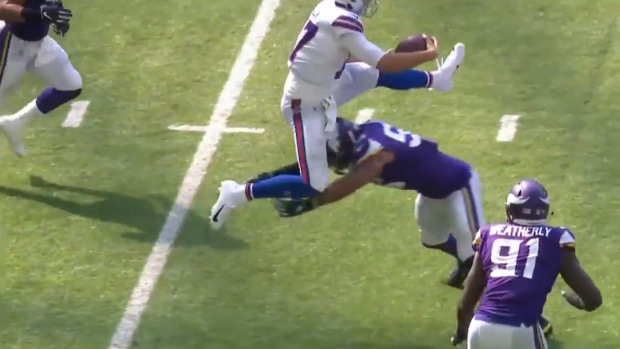 It’s impressive enough when a receiver or a running back hurdles a defender to keep a play alive, but it certainly isn’t something we expect with a quarterback. So, when Buffalo Bills quarterback Josh Allen went airborne to pick up a first down on 3rd-and-10, it was, well, a pretty resourceful play.

At the end of the same drive, he took to the sky again, jumping over the line of scrimmage for a touchdown on 4th-and-goal.

HE CAN FLY! #Bills #BillsMafia pic.twitter.com/XH2m3X3xks

A game manager, Josh Allen is not. Drafted with the seventh overall pick by the Bills this year, Allen has played fairly well so far this year and threw for 196 yards on 15-of-22 passing to lead the team to their first win on Sunday. Also, he hurdled a guy.