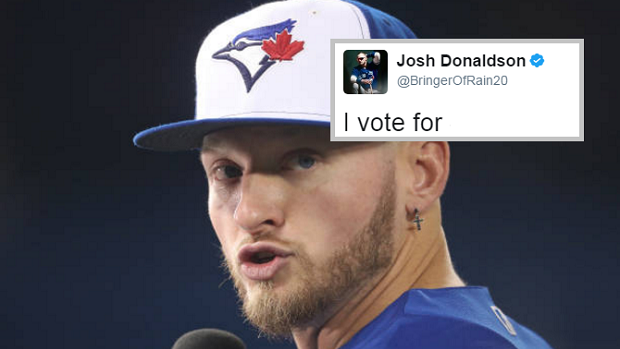 Last night’s Blue Jays game was one that really woke up a lot of Blue Jays fans.

With what might be one of the best catcher aversions ever in a play at home plate, Chris Coghlan caught the baseball world’s attention. Then, Marcus Stroman made the game even more memorable by pinch hitting for an extremely rare pinch-hit double to help give the Blue Jays a late lead.

According to @AndrewSimonMLB's research, the last AL pitcher with a pinch hit that went for extra bases was Gary Peters in 1971. #BlueJays

It was an extremely impressive piece of hitting and it caught the eye of a Blue Jay that wasn’t able to be on the field with his team last night. Josh Donaldson is still dealing with a calf injury that will keep him off the field for a little while longer. To try and fill that third base spot, the Blue Jays have been getting creative. Last night, fans went crazy when Russell Martin was given the chance to fill in at the hot corner, and Donaldson wants to take that craziness to the next level.

I vote for Stroman to play third tomorrow.#gamechanger

Stroman was once considered as an option to play middle infield in the MLB, so a switch to third base wouldn’t be that uncommon. We know he’s got the arm for it, and apparently he’s pretty great on the bases too.

Duke's former head coach Sean McNally told me he initially recruited Stroman as a shortstop & that he had great base-running instincts.