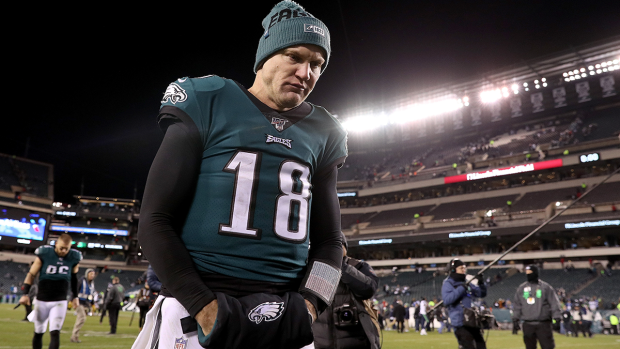 The Philadelphia Eagles finished the season strong behind their quarterback Carson Wentz. It was an impressive end to the regular season considering the long list of injuries the Eagles had.

Unfortunately, that list got even longer in their wild card game against the Seahawks as Carson Wentz left the game with a head injury, and he was replaced by Josh McCown. Two years ago the Eagles won the Super Bowl behind Nick Foles after Wentz tore his ACL. This time around, McCown was unable to lead Philadelphia to a win over the Seahawks, but the internet’s reaction to seeing the 40 year old quarterback make his postseason debut was priceless.

Josh McCown is the 1st player in NFL history to make his postseason debut at 40 years old.

Heres what this playoff game would look like McCown and his current WRs if you rewound time 15 years. pic.twitter.com/sb3SL42W4h

Josh McCown handed the ball to Emmitt Smith for his final TD.

He threw it to Larry Fitzgerald for his first TD.

Now he’s running around in a 2020 playoff game. Amazing career. Love him. pic.twitter.com/OOv8ESQ696

Josh McCown is the most elusive 40-year-old QB with a pulled hamstring I’ve ever seen.

Carson Wentz when he rolls up to the Linc next season and sees Josh McCown statue next to the Nick Foles statue. pic.twitter.com/Upf2Ua9wv9

Although it didn’t end the way McCown wanted, you can’t question his fight. After the game he was extremely emotional and was consoled by teammate Zach Ertz.

It was undoubtedly a tough moment for McCown, but you can’t help but feel bad for Carson Wentz as well. He was having an excellent season for the Eagles and once again he had to watch the playoffs from the sidelines.