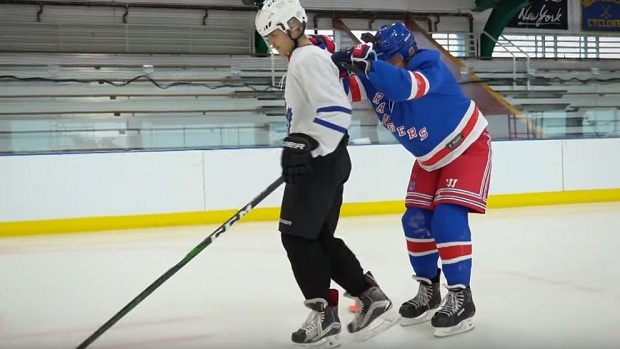 Justin Bieber has been making the headlines as of late (yes, he released a new album at midnight on February 14), but he’s been in the headlines for hockey related reasons.

The Canadian pop star has made it clear, especially this season, that he’s a massive hockey fan, and has been sharing some of his highlights on his accounts. It even led to a friendly wager between Bieber and St. Louis Blues goalie Jordan Binnington.

Late Thursday night or early Friday morning, depending where you were tuning, Bieber was a special guest on The Tonight Show Starring Jimmy Fallon. Keeping with the hockey trend, the host decided to get some skating lessons and hockey pointers from Bieber himself.

After tying Fallon’s skates for him, the two hit the ice and started it off with skating lessons. From there they transitioned to the skating drills, before ending it all off with a shootout.

It’s not very surprising that Bieber came out on top in this one, but the effort was there from Fallon.