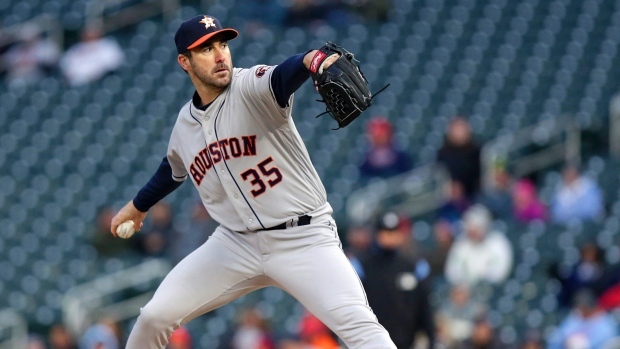 It’s one of the most unoriginal chirps you can tell a baseball player.

You hear it often all the time if you frequent professional baseball games, for reasons that are obvious. Players are used to this uncreative and played out phrase, which is why players like Justin Verlander has decided to finally fire back at those chanting the trite chirp.

During the Astros’ 10-1 beat down of the Chicago White Sox on Saturday night, one heckler decided to heckle the Astros despite their lengthy lead. Verlander then emerged out of the dugout with a couple of pieces of paper and wrote down a simple, yet effective comeback.

#JustinVerlander (@justinverlander) wrote “no, you suck” on a paper sign to a Chicago fan that was heckling him and his @astrosbaseball teammates during Saturday’s 10-1 win over the @whitesox. #Astros . (🎥Via: Twitter/jacobqualls3)

Brilliant. While we can’t fully see the sign, you can hear the fan in the background read it out for us.

Verlander spent years dominating the White Sox when he was with the Tigers, so it’s no surprise why White Sox fans making him a target. Even though it was all in good spirits, Kate Upton’s husband owns a 21-13 record with a 3.74 record, so perhaps Verlander isn’t the one they should be targeting.

If you’re going to go at the defending World Series champions, you better bring you’re A game, otherwise, you’ll get owned, and your fellow fans will turn on you.