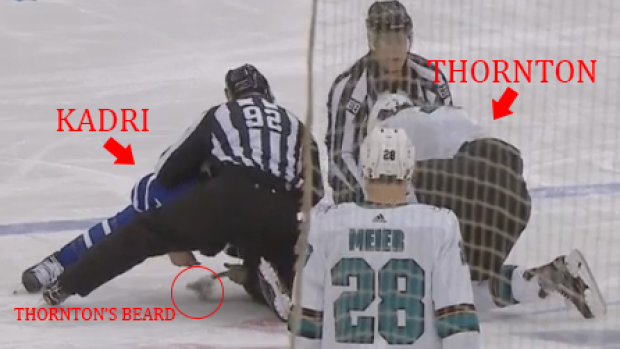 We don't know what was said between Joe Thornton and Nazem Kadri moments before the start of the Leafs-Sharks game, but whatever it was got both players extremely fired up and cost Joe some of his hair in the end.

Literal seconds into Thursday night's game, Thornton and Kadri engaged in a fight right off the opening faceoff. The tilt was short, but once the dust had settled, Thornton was just just a few hairs short of a full beard thanks to Kadri slightly missing the mark when he reached for the Sharks centre's jersey.

Joe Thornton lost PART OF HIS BEARD in that fight with Kadri.#SJSharks | #TMLtalk pic.twitter.com/I8pCSGlw4O

No one was quite sure of what to do with Joe's beard, but for some reason the chunk ended up in Sharks backup Aaron Dell's glove. Gross.

Kadri vs. Thornton Round 2 is surely imminent. As Darren Dreger tweeted, Thornton won't take too kindly to that sort of treatment towards his majestic beard.

I feel like...at some point in Thornton's remaining NHL days he's going to make Kadri pay for that. https://t.co/9ttGLhHwXW