Kapanen on fellow Finn Laine: 'He told me to go get my hair cut'

Toronto Maple Leafs forward Kasperi Kapanen is playing on the Leafs' top line and it’s clear that he’s gained a deal of confidence… perhaps too much confidence...

The winger has been lightning the lamp alongside Auston Matthews on the team’s top line, notching 5 goals and 4 assists in just 10 games. The two teamed up for a pretty goal on Wedesnday night agains the Winnipeg Jets, when Matthews provided a screen on a blistering wrist-shot from Kapenen in the slot. Any hockey can tell you that Matthews is more of a goal-scorer than screener, and Kapanen was quick to point that out when asked about the goal. The confidence is clearly at an all-time high because he dropped a pretty fantastic chirp at the NHL’s leading scorer’s way. 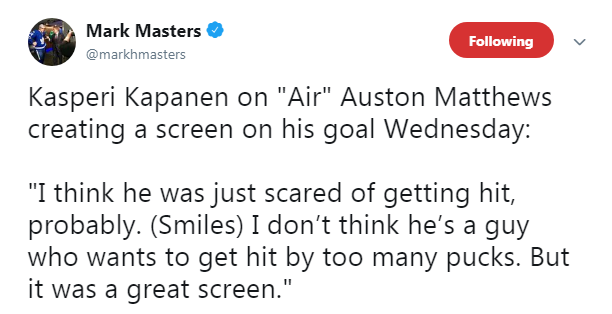 Jump or screen… we’ll let you decide on that one!

Kap was feeling it today, as he took things a step further while talking about his Finnish buddy Patrik Laine. After the jets’ star told Kapanen to cut his hair, the latter made it clear that Laine is the last person that should be chirping anyone about hair… period.

The Leafs will host the Jets tonight at Scotiabank Arena and we’re sure all sorts of chirps will be flying out of Kapanen’s mouth during the game.