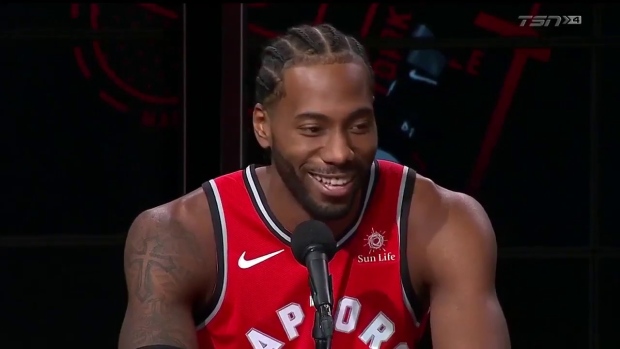 For a guy who doesn’t really say all that much, an incredible amount of what Kawhi Leonard says ends up becoming a meme.

Just count 'em: The laugh, WHAT IT DO BAYBEEEEE, Fun Guy, board man gets paid, hey hey hey and we guess that the next one up is “city views over interviews,” since he filed a trademark for it and all.

How does he feel about it? Well, Kawhi sees it as all love. That’s probably for the best, since the internet probably isn’t going to stop making memes of him any time soon.

Asked what he thought about OKC’s Darius Bazley doing his best Kawhi “hey, hey, hey” impression when on the mic thanking fans before the home opener, Kawhi Leonard said, “I just take it as love. You know what I mean? People love me I guess and like the things I say." pic.twitter.com/BmOpa8Arc7

Kawhi recently starred in a commercial for the new Terminator movie, so he isn’t afraid to slip into a role when he has to.

Still, though, nothing is better than the accidental moments that end up as memes. How many guys can turn “hey hey hey” into an actual viral moment?