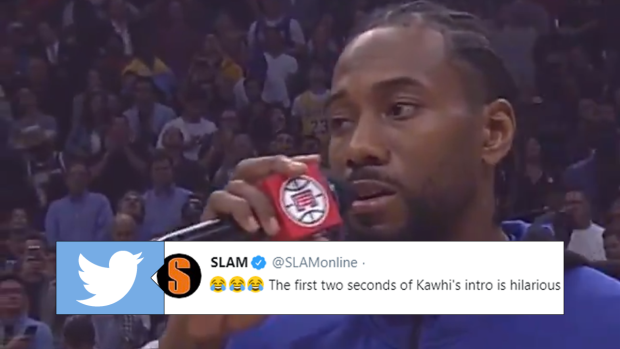 Kawhi Leonard is an original. Just about everything he does is unorthodox. Watching him play is interesting because if you were to watch him play without knowledge of his history of success, you might not feel much of a threat when you see him dribbling across half court. He’s not the quickest, he’s not the tallest, he’s not the best shooter, but he has a robot-like efficiency.

That’s not the only robot-like quality he has though. In Toronto, his personality really began to shine and the NBA audience started to have a greater appreciation for his even-keel demeanor. So it shouldn’t surprise anyone at this point to hear he had another simultaneously dull and endearing moment during his Clippers intro.

Of course, people put that clip to use right away, starting with the Clippers win over LA and crossing into pop culture territory with some more relatable scenarios that this fits perfectly with.

When you and yo sibling fighting and yo dad see 😭😂😭 pic.twitter.com/Pef9I6eVMN

Kawhi keeps the same energy all the time.

FUN GUY. Kawhi really broke out the laugh to end his speech 🤣