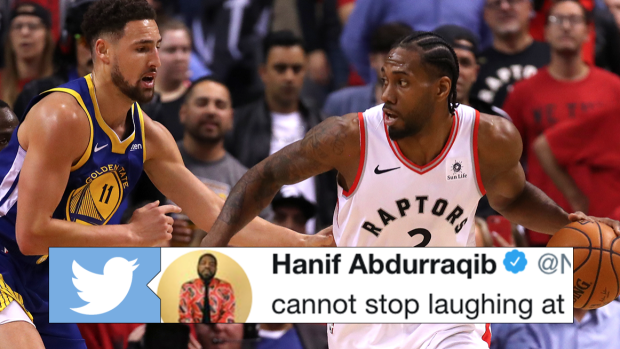 As many Canadians, Raptors fans, and basketball fans in general have learned this season, Kawhi Leonard is a man of few words.  Leonard loves playing basketball, but that passion for the game is expressed more in actions than words on and off the court.

That doesn't, however, mean that Leonard stays silent on the court while he's putting MVP candidates like Giannis Antetokounmpo on posters and locking down others on defence.  In a recent article in The Athletic by Jayson Jenks, Leonard's former college teammates and coaches at San Diego State revealed some of the things he would say on the court during a game.

Kawhi is a psychopath. pic.twitter.com/c4ktQokPu5

And maybe it’s just me but I love the image of Kawhi Leonard saying, “I’m the board man” and “Board man gets paid” back tab San Diego State. https://t.co/LsrOT6kzRX

"BOARD MAN GETS PAID" MIGHT BE THE SINGLE GREATEST PHRASE IN SPORTS HISTORY AND NEEDS TO BE ON EVERY SINGLE T-SHIRT AND BILLBOARD.

cannot stop laughing at the idea of Kawhi's voice saying the words "board man gets paid" while casually collecting a rebound with a blank expression on his face https://t.co/6oUkkjVtet

*goes baseline Kawhi cuts you off

*Spins back to the middle Kawhi bodies you up

*posts up and throws up a bullshit fadeaway

“Nope, board man gets paid.”

"Board Man Gets Paid" needs to be a shirt. I will cop.

Kawhi is a movement b. Board man gets paid. https://t.co/Nukph4paCD

Someone needs to get Kawhi mic'd up ASAP because if he's still tossing out lines like this each and every game, it's a crime we haven't been able to hear him say them.