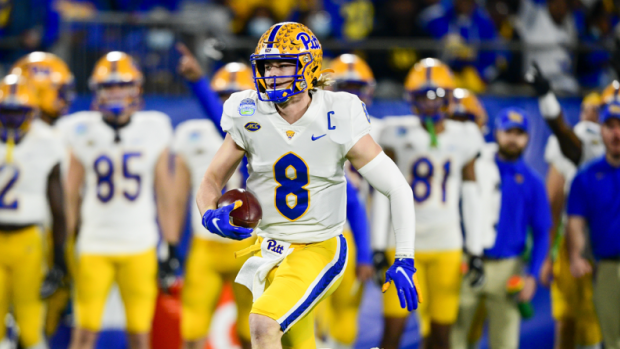 When a quarterback decides to tuck the ball away and take off running, it’s certainly a tall tasks. Suddenly staring down an entire defence hungry for a big hit, it becomes very clear how quarterbacks bodies aren’t generally designed to take the beating.

That’s why the slide rule exists!

Allowing quarterbacks to slide without the risk of defenders laying a huge shot opens up the option of running for otherwise deterred pivots. The slide puts an immediate end to the play and allows the quarterback to jog back to the huddle unscathed.

For Pitt quarterback Kenny Pickett, the rule allowed him to pull a very strange move against Wake Forest – the fake slide.

KENNY PICKETT FAKED THE SLIDE AND RAN 58 YARDS FOR THE TD 😱 pic.twitter.com/EypNNJZYHE

While slide cancelling in real life is certainly a cool move, it’s also sparked some debate. With hits on slides being punished, was this move from Pickett taking advantage of the defence easing up out of necessity?

15 yard penalty if he hits him on a slide.

What the hell is the defender supposed to do there??

He gonna get killed next scramble lol

That should be unsportsmanlike conduct. It’s the exact equivalent of faking a fair catch