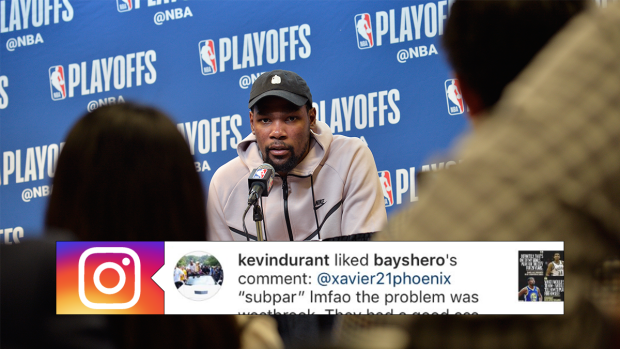 Kevin Durant is an active social media user, which, of course, has been a topic of note for the Warriors star in the past. Well, he’s back in the headlines today after an Instagram-related mishap, in which he liked a comment that blamed Russell Westbrook for the perceived failures of their Oklahoma City Thunder team.

As captured by Sports Illustrated:

What does Durant have to say of all this?

Kevin Durant tells me it was a "total accident" that he liked a comment on Instagram about Russell Westbrook. Was just an honest mistake.

Kevin Durant tells ESPN he inadvertently liked the IG comment that was critical of Russell Westbrook as he scrolled through his timeline. "No story here,” he said.

It’s much more fun, though, to believe that Durant earnestly blames Westbrook for the team that traded James Harden to make room for Kendrick Perkins’ contract. We still don’t have any real closure to the Durant-Westbrook split -- despite some heated games between the two, we aren’t any closer to knowing what they really think of each other in the aftermath of those days with the Thunder.

Hey, maybe we’ll never find out. For as long as that’s the case, though, these social media slip-ups are going to remain the closest thing to the truth that we’ll have, and you better believe that fans remain unfulfilled by the narrative surrounding the breakup of one of the NBA’s most devastating cores in recent memory.

At least this isn’t anywhere near as bad as Durant’s burner account fiasco! (Look it up.)