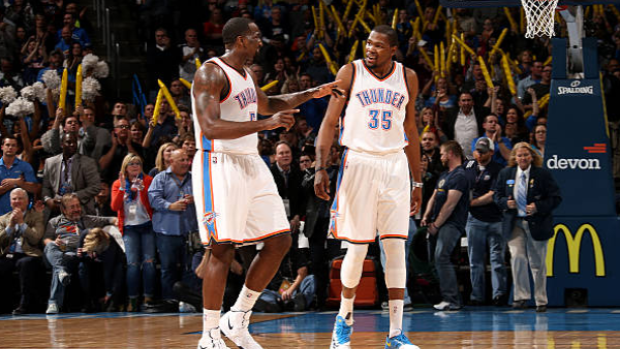 Ever since Perkins began work as an analyst for ESPN, he’s made it very clear that nobody is safe from his opinion. He’ll go after former teammates, superstars, other analysts… he says exactly what’s on his mind.

In a way, you respect an unaltered, raw opinion like that. At the same time, it can sometimes be tough to watch bridge after bridge burned in a league full of exuberant personalities. Of all the league’s players, there is perhaps no bridge that has burned more dramatically than that between Perkins and Kevin Durant.

Durant – who also isn’t afraid to speak his mind – made his feelings known about Perkins after his former teammate stated that Durant joining the Golden State Warriors was the weakest move in NBA history. Durant responded by calling Perkins a sell out, and then retweeting a fan’s video showing Perkins tossing up an air ball so bad the commentator asked “was that a pass?”

It’s all good Perk! Real NBA fans know you were one of the most lethal hoppers back in the day pic.twitter.com/8Pbdw5Am8H

More recently, Durant joined the Tea with A and Phee Podcast where WNBA players A’ja Wilson and Napheesa Collier goaded him into a little extra bashing. Likely well-aware of the beef, Wilson and Collier cleverly have KD guess Perkins’ point average during Durant’s MVP season in 2013-14.

Durant’s guess of 5.4 was actually quite generous as it turns out, but that’s about where the generosity ended.

It’s not very often you hear a guy call his former teammate “terrible”, but Perkins seems to bring that out of guys these days. Can we have Perkins join the podcast next?