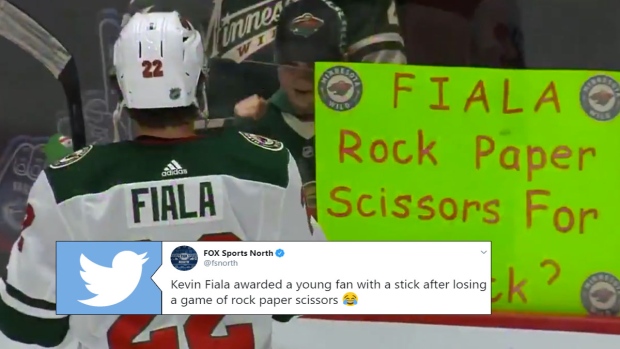 Kevin Fiala had a breakout season with the Nashville Predators in 2017-18 when he scored 23 goals and 48 points in 80 games, but he only managed to score 10 goals and 32 points in 64 games with the Preds the following season.

As a result, the 2014 first round draft pick was traded to the Minnesota Wild at the trade deadline and it’s a move that has worked out very well in his favour. After scoring three goals and 7 points in 19 games with the Wild last year, the 23-year-old entered Wednesday’s game with 14 goals and 38 points in 53 games and 11 points over his past nine games.

Before the game, Fiala noticed a young Wild fan’s sign and made the youngster’s night in more ways than one.

Kevin Fiala awarded a young fan with a stick after losing a game of rock paper scissors 😂 pic.twitter.com/wP52OT9zwQ

Rather than straight up asking players for sticks or a puck, fans have started using their signs to challenge the players to things as simple as Rock, Paper, Scissors, and a lot of the players are all for it.

The interaction is cool enough, but it’s even better that Fiala skated over to the bench and sent the youngster home with one of his game sticks.