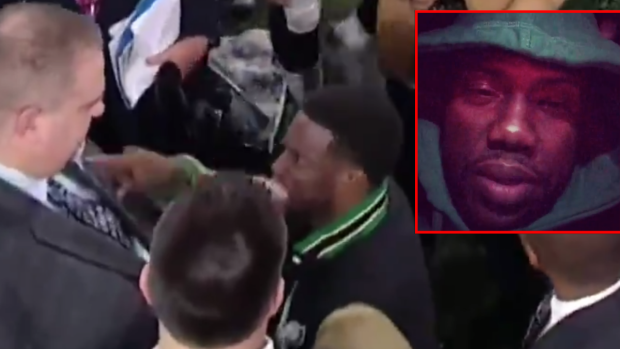 It's always special when a team that has never won a championship finally wins a title and Sunday night, the Eagles accomplished that goal as they defeated the New England Patriots in the Super Bowl.

Fly Eagles, Fly! The #Eagles are Super Bowl Champs! . They defeat The #Patriots to capture first their Super Bowl in franchise history.

The victory was so much more than the Eagles' first Super Bowl win in franchise history as evidenced by how the fans celebrated in the streets of Philadelphia and by how many big names were in attendance for the game.

One of those big names was Kevin Hart and he made headlines for what he did after the game as he tried to get on stage to celebrate with his team, but the security guard he was trying to get past was having none of it.

After getting denied by security, Hart then spoke on television and swore while also admitting he had a couple of drinks at the game.

Kevin Hart having himself a good time pic.twitter.com/Geo04wcJB4

All in all, Hart had an incredible time watching his Eagles win and after not being allowed on stage and swearing on TV, the Philadelphia native took to Instagram to explain what happened with the security guard and why it's not good to drink.

Hart said it best, who gives a bleep.  The Eagles are Super Bowl champions for the first time ever and that's the best excuse to not only celebrate, but try and celebrate with the team.

Hopefully the team allows Hart to be part of the parade in Philadelphia once the team gets home and the streets are cleaned up.

Did the #Eagles win the Super Bowl? You better flippin' believe it . (via @barstoolsports)