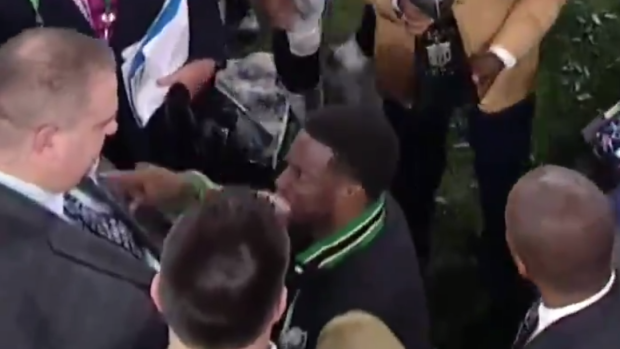 A number of celebrities and athletes were at Super Bowl 52 in Philadelphia to support the Eagles including Kevin Hart.

Hart was born in Philadelphia and he, like every Eagles fan on earth has never seen a Super Bowl victory.

When the final seconds ticked off the clock and Tom Brady's last pass fell incomplete, you can imagine Hart was pretty pumped up.  In fact, he was so excited that it looked like he tried to get on the podium to celebrate with the Eagles.

Unfortunately for Hart, the security guard wouldn't let him anywhere near the stage.

Was that them denying Kevin Hart onto the stage or am I tripping?

Security: “Sorry Kevin Hart, you gotta be at least 5-feet tall to get on stage” pic.twitter.com/VHymAX2AgK

Kevin Hart has to pretend to be a player’s kid to get on the stage.

Security guard playing better defense on Kevin Hart than either team did in the game: pic.twitter.com/Stj85U87co

lol kevin hart can’t get up on stage pic.twitter.com/Hciq7l3X1t

Although he didn't manage to get on stage, Hart did get on television and admitted he had a couple of drinks while watching the game.

Kevin Hart having himself a good time pic.twitter.com/Geo04wcJB4

Hopefully the Eagles let Hart join them during their victory parade to make up for the fact that he couldn't get on stage.