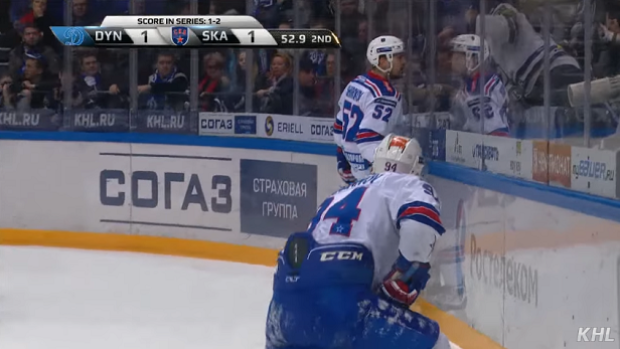 Sergei Shirokov might be the most intense hockey player we’ve ever seen.

In the KHL playoffs, with his team up 2-1 in a series with Dynamo Msk, the Saint Petersburg forward scored to make the game 2-1, a goal which ended up being the game winner. The goal was a pretty standard rebound goal, but it was the celebration that stood out.

Shirokov goes behind the nets and stares directly into the souls of fans of the opposing team – the fans, well, they reacted how you might expect them to.

Shirokov has had a big couple weeks in North America, as he also made headlines when he replicated Nikita Kucherov’s no-move move in the shootout.

THE NO MOVE MOVE happens again hahahahha. This time from the @khl. Sergei Shirokov shakes the goalie. 😎 pic.twitter.com/XUODm65wGU

We’re sure Shirokov is hoping that his team can close out the series in the next game, as he may not want to return to Moscow. Who knows what fans may have planned for him if that’s the case.