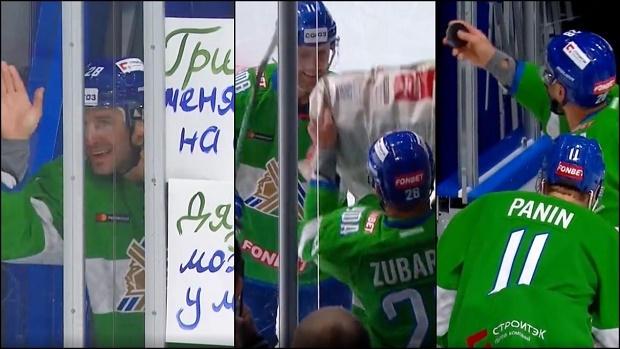 Fans used to show up early to hockey games just hope they’d be in the right place at the right time to grab a puck from the warm-ups. Then one day some fan decided to put the request for a puck onto a sign and it changed the game forever.

We’ve seen fans get creative with their asks at hockey games over the years, but over in the KHL Grigory Panin of Salavat Yulaev Ufa is the one making requests and he’s offering up pucks in return.

Panin has asked fans to bring food donations for animal shelters to his team’s games and in return he’ll give them a puck from warm-ups.

His teammate Andrei Zubarev joined the cause 🐶💚 pic.twitter.com/ETOGLpJ6Po

Panin’s teammate Andrei Zubarev is all in on the cause and came through with a massive bag of dog food and got his warm-up puck as promised.