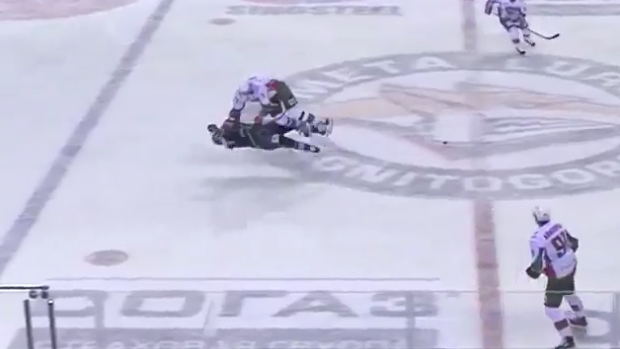 KHL player Alex Budkin was left with a bloodied up face after receiving a blatant head shot from opponent Stepan Zakharchuk. Budkin received an outlet pass from his defender and as he turned to break up the ice, Zakharchuk caught him up high.

Usually you like to give players that benefit of the doubt, but this hit looked like it was lined up from a mile away. Zakharchuk received an eight game suspension for the hit, many are saying that it should be even more than that. In addition to the suspension, it is expected that the Ak Bars Kazan defender will have to pay a fine as well.

Yikes, it's hard to watch someone go through that on the ice. Budkin’s teammates quickly leaped to his defence and certainly didn’t make it easy for Zakharchuk to get away with it.

The play was extremely similar to the well-known hit thrown by Brian Campbell on R.J. Umberger.

This hit is widely considered to be one of the hardest hits of all time. The difference is Campbell didn’t squarely hit the head of his opponent the same way Umberger did, but it will still make you think twice about breaking out of your own zone.