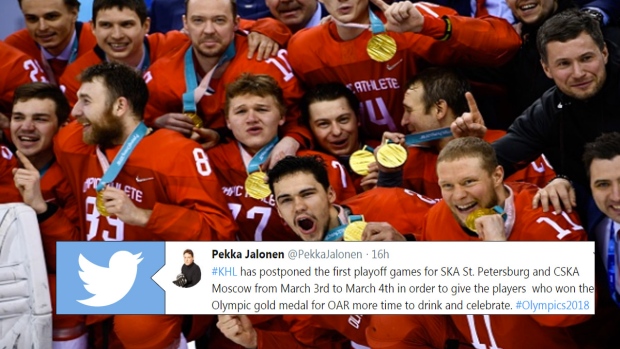 Although they weren’t technically competing at the 2018 Winter Olympics as Russia, the nation is still celebrating the gold medal won by the Olympic Athletes From Russia the same way they would have if they were allowed to compete as Team Russia.

The Olympic Athletes from Russia capture the gold medal after defeating Germany 4-3 in overtime! #pyeongchang2018

The KHL regular season is a lot shorter than the NHL regular season, so teams are already in playoff mode as the postseason is set to get underway at the end of this week. Since the 2018 Winter Olympics concluded less than a week ago, the KHL has decided to postpone the opening round between SKA Saint Petersburg and CSKA Moscow by a day so that the players who won an Olympic gold medal can party a little more.

#KHL has postponed the first playoff games for SKA St. Petersburg and CSKA Moscow from March 3rd to March 4th in order to give the players who won the Olympic gold medal for OAR more time to drink and celebrate. #Olympics2018 #PyeongChang2018

The first game of the series was set to take place on Saturday, March 3, but instead the two teams will now open up their series the following day on Sunday, March 4. Considering the OAR team consisted of 15 SKA Saint Petersburg players and eight CSKA Moscow players, it’s a pretty reasonable call made by the KHL.