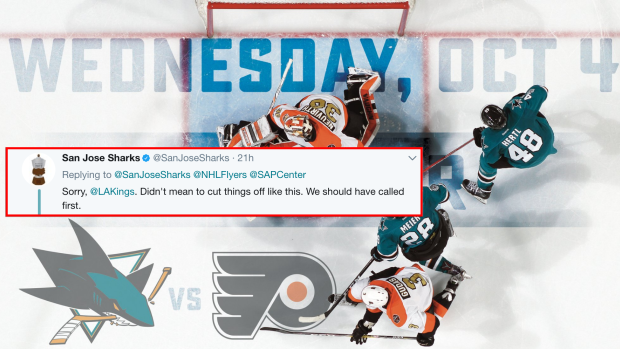 The season may be over, but things are as busy as ever in the NHL right now.

Wednesday night in Vegas, the Golden Knights announced their expansion draft selections and the awards for this past season were given out.

The #GoldenKnights have been assembled! Your thoughts on their picks? 🤔

Just because Vegas has a team now doesn't mean things slow down, though.

The trade freeze was lifted at 8am ET on Thursday and the NHL Draft is Friday night.  In other words, be ready for some trades.

FWIW, this coming from someone with no sleep who's ready for a snooze, I think there'll be more trades Friday than today.

Plus, the NHL schedule will be released Thursday, but teams took to Twitter to announce their home-opening games on Wednesday well before the expansion draft.

The countdown is on!

Just 105 days until we show some brotherly love to our friends in the east on opening night at the Tank! pic.twitter.com/bAi5OjPyLn

There's a specific reason why we decided to use San Jose's home-opening game tweet, for the first time since 2013, the Sharks' opening game of the season won't be against the Los Angeles Kings.

Sorry, @LAKings. Didn't mean to cut things off like this. We should have called first.

Rather than respond with something lighthearted, the Kings' Twitter account hit the Sharks with a huge steel chair shot.

It's okay, you guys were never going to put a ring on it anyways.

Can't recover from that.

There's always next time Sharks, and once the schedule comes out, they can circle the date to exact their revenge.