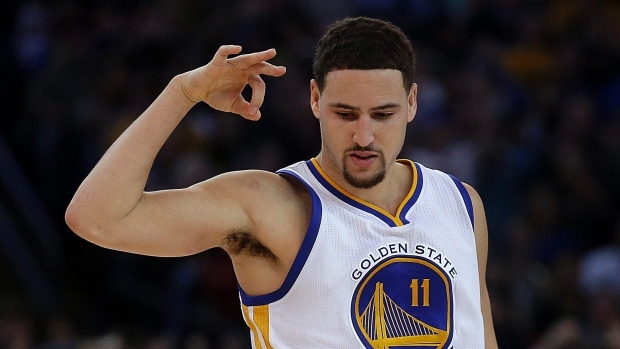 Over the last few months, several athletes and teams have used their social platforms to financially support relief funds in hopes of aiding those effected by natural disasters like Hurricane Harvey and Hurricane Irma.

From J.J. Watt and the Houston Texans, to Nazem Kadri and Alex Ovechkin, and the Houston Astros and Carlos Beltran, it’s been quite encouraging contributions of not only dollar donations, but also all the logistical support in terms of food, water, hospitality and transportation.

Klay Thompson of the Golden State Warriors is the latest athlete to donate a chunk of change. For every point he scores in the Warriors' next three home games, the Los Angeles product will donate $1,000 to the Redwood Credit Union Community Fund.

During our next 3 home games, I'm pledging $1000 per point to North Bay fire relief. Join me by pledging any amount: https://t.co/IRUXEdItDM pic.twitter.com/oTAbssc1I5

To date, the wildfires have taken the lives of 42 people, and created over $1 billion in property damage. Over 15,000 people have been removed from their homes, resulting in one of the most expensive and devastating disasters in the history of California. It’s expected that the total cost of damage from the fires will come in at around $4.6 billion.

On top of the donation, thompson has created a Pledge It link for people to send donations to. Over $80,000 has been pledged so far, and all funds donated will be tax deductible.

Thank you! Any amount helps! https://t.co/d1TvLMb7I6

The Warriors, Oakland Raiders San Fransisco 49ers, San Jose Sharks, San Francisco Giants, Oakland Athletics, and San Jose Earthquakes all came together to pitch in a total of $450,000 back on October 11 for those impacted by the fires.

For the sake of the Warriors and Californians, let’s hope Klay goes off against the Raptors, Wizards, and Pistons. Thompson averaged 22.3 points per game last season, which would equate to a grand total of $66,900 if he were able to average that over the next three games.