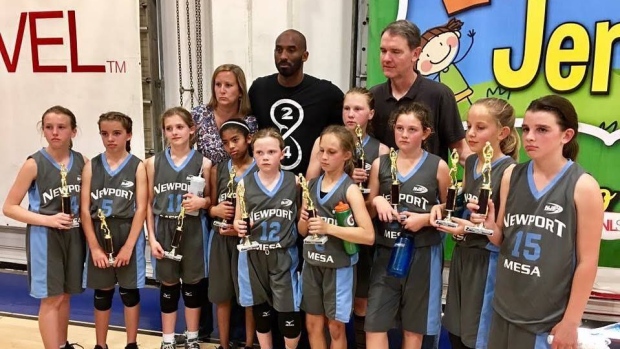 When it comes to the “Mamba Mentality,” Kobe Bryant doesn’t joke around.

We knew Kobe in the NBA as someone who always extolled the virtues of hard work, which is part of the reason he was so good. It was also grating on some of his other teammates at times, but in a new twist, now it seems like he’s criticizing one of the young girls on his Mambas youth basketball team through a passive aggressive Instagram post.

After going viral, the caption of the post has been edited, but screenshots are forever.

“Here’s our fourth place “winners” picture lol six of the kids in the picture stayed with me and worked every single day to get better and continue to work to this day. The 7th player (not in pic) missed this game for a dance recital so that should tell you where her focus was at this time.”

Of course, the absurdity of criticizing a little girl for choosing to dance instead of play basketball wasn’t lost on the internet, and after Kobe’s caption was roundly criticized, here’s the edit:

“The 7th player (not in pic) missed this game for a dance recital so that should tell you where her focus was at this time, meaning she enjoyed dance more than ball which is fine. Now? She eat sleeps and breaths the game.”

Nah fam I was just explaining why she wasn’t in the pic. Most of my kids on the team played and still play other sports including my daughter so it’s all love. Don’t misunderstand the message.

We’re not sure if that fully accounts for the tone of the original caption, and it’s been known already that Kobe can be a bit extreme when it comes to, well, the Mamba Mentality. (Poor Smush Parker, man.)

Still, going at a middle-schooler would be taking things to a new level.

Kobe publicly scolding a 12 year old girl for not showing proper dedication to his Summer league team & instead having diverse interests, to 10M people on Instagram, no less, is really something. https://t.co/O8ua2ZIXgw

Imagine being a 12 year old girl and getting put on blast by Kobe goddamn Bryant just cause you wanted to dance instead of play ball. This is psycho behavior https://t.co/96XKlS5R2F

imagine having your kid stumble onto the Mambacita's team

and there being some crazy parent pushing the kids extra hard

but you're looking for a little... less intense situation for your kid

and then finding out that parent is Kobe..

and then wanting to tell him dial it down pic.twitter.com/tAfCLb1UBR