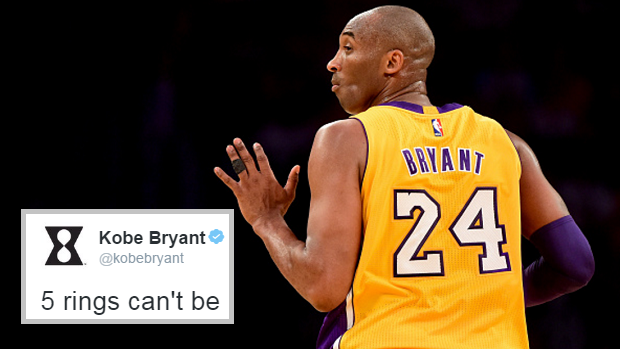 Kobe Bryant is one of the winningest players in NBA History and, like Tom Brady, his name is often paired with a goat emoji by people on the internet.

That isn't the only connection the two superstars share, as Brady added his fifth ring last night, adding him to a short list of players who can wear a full hand of championship rings. Bryant won his fifth ring in 2010 and only one player, Charles Haley, has five rings in the NFL..

So, Kobe is apparently willing to overlook any cheating allegations against Brady, because as he says, you can't deflate rings.

This is basically pulling a Patrick Roy for Brady and saying that he can't hear all the haters because he has five Super Bowl rings plugging his ears (that's a lot for just ears, maybe he has a couple covering his eyes and one to block any scent of a hater).

How many rings does Tom Brady have? #Superbowl https://t.co/0HpjnsLH1f

Either way, Bryant is right. The whole deflate gate scandal was silly to begin with, and this only further secures Tom Brady's legacy as the greatest NFL quarterback of all time.

Is Tom Brady now officially the Greatest of All Time? 🐐 #SB51