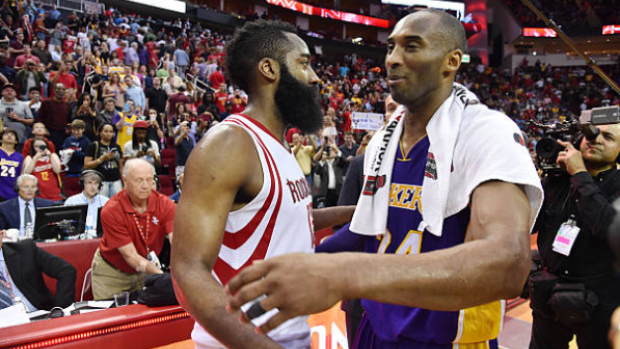 Can James Harden propel the Houston Rockets to an NBA Championship one day?

Kobe Bryant doesn't think so, at least at the current rate Harden is producing at.

Sitting down with ESPN's Rachel Nichols, the five-time NBA champion expressed skepticism that Harden's incredible ability to pour in the points won't help the Rockets in lifting the Larry O'Brien Trophy.

Kobe Bryant believes James Harden and the Rockets won't win a championship with the style of play we're seeing on his scoring tear. (via @Rachel__Nichols) pic.twitter.com/RQvdHPvpJw

"I'm not a fan of it, in terms of winning championships. "I don't think that style is ever going to win a championship."

While it's not necessarily a criticism of Harden himself, Kobe did acknowledge Harden's production has been "absolutely remarkable" and recognized that the Rockets' will be more balanced when Chris Paul returns to the lineup.

"It's a testament to how remarkable it is because people are now trying to minimize what he's doing," Bryant said. "I mean, he's doing some phenomenal stuff."

The Rockets have been critized for being too predictable with the ball in Harden's hands, and adding a playmaker in Paul back into their lineup will surely give them another dimension.

Averaging 36.3 points per game on the season, Harden is taken a stranglehold as the top MVP candidate to go along with his 8.1 APG and 6.8 RPG.

In January, Harden poured in 43.6 PPG and hit the 50-point mark in three games along with a 61-point performance against the Knicks on the 23rd. In the 2005-2006 season, Bryant averaged 35.4 PPG, but finished fourth behind Dirk Nowitzki, LeBron James and Steve Nash for the MVP.