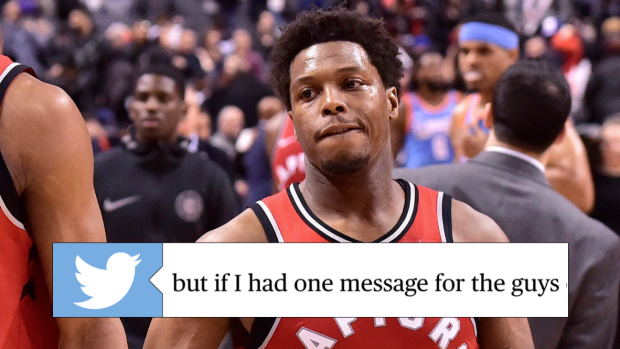 Saturday night, Villanova has a chance to make it to its second NCAA Final in the last three years if they can beat Kansas.

Villanova alumni Kyle Lowry will probably be able to catch some of the game after the Raptors' game against the Celtics wraps up, but ahead of the Wildcats' matchup against the Jayhawks, Lowry wrote some advice for this year's squad in The Players' Tribune.

I went back just this year and saw ’Nova play in the Big East tournament. The atmosphere was unreal. The pride students and alumni take in representing their teams. Being a fan is one thing, but being a part of it is so much more.

The thing is, no matter what, whether you’re watching or playing, the college experience will only last a moment. My two years were a blur. I look back and can barely remember a time when I wasn’t on the basketball court. I definitely missed some things at school that I’ll never be able to go back and do over.

I can’t say I have any regrets about how it all turned out, but if I had one message for the guys on the team, it would be just to remember that it doesn’t last forever. You’ll represent Villanova forever, but you’ll only be there for the blink of an eye.

Some sound advice from the former Wildcat, and it's important for the players to take Lowry's advice to heart because the big moments don't last forever.

#tbt.... The day I committed to Villanova was such a great day. Do I look any different ? Lol nope!!! #thatsthefacemommakeswhen #sheknowshedoesnthavetopayforcollegelmao!!!

What does last forever, though, is being a Wildcat and that's another message Lowry echoed in his Players' Tribune piece:

Let’s get it, ’Nova. We’re almost there. You got a city on your shoulders. Once a Wildcat, always a Wildcat.

And no matter what happens this weekend, I promise — Philly loves you. Forever.