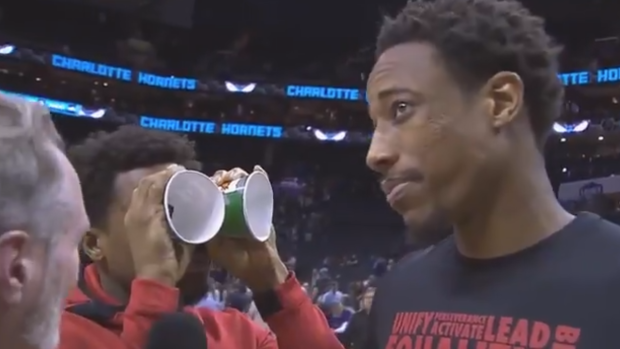 It’s no secret that DeMar DeRozan and Kyle Lowry have one of the closest relationships among teammates in the NBA. The two have grown up as players together, playing for a prove-em franchise where it sometimes seems as though brotherhood is the most important element.

It’s also no secret that the Raptors aren’t afraid to crash each other’s interviews, just look at how Jonas Valanciunas has been casually dropping in lately.

Outside of DeRozan's big game last night, this photo of Jonas Valanciunas confirms my suspicion that he's a big fan of 52 Pickup. pic.twitter.com/7JddxxU3jA

Sunday saw the Raptors lay a licking down on the Charlotte Hornets, putting up a huge 123-103 victory in which they held close to a 30-point lead for most of the 4th quarter. Obviously feeling good after the match, Lowry came by the stick his nose (or more appropriately, his eyes) into the middle of DeMar DeRozan’s post-game interview.

.@Klow7 was goofin' around with Jack and @DeMar_DeRozan following the @Raptors win over the @hornets. 😂#WeTheNorth pic.twitter.com/ONj5VjP08V

While the goofing off didn’t seem to impress DeRozan, Lowry got real when Jack Armstrong asked what he had to say about Coach Dwayne Casey’s milestone 300th win.

We’re sure we haven’t seen the last of these two crashing each other’s interviews.