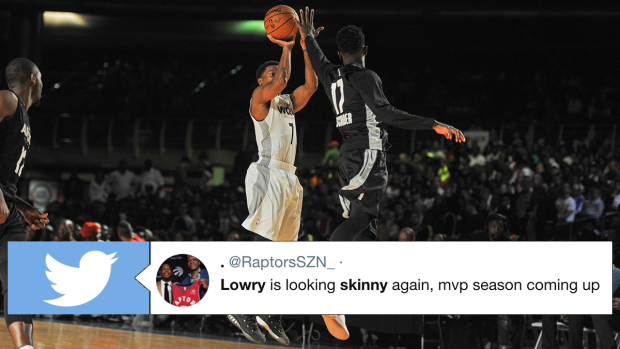 Kyle Lowry has been through this before. In the 2015 offseason, Lowry lost enough weight to make headlines across Toronto, with expectations of a new and improved point guard for the Raptors.

That ended up being Lowry’s best season of his career at the time, and he helped take Canada’s basketball team to the Eastern Conference Finals against the Cleveland Cavaliers. Well, with the Kyrie Irving Turmoil in Cleveland Raptors fans were already starting to feel optimistic entering the season and that has continued after fans got a look at their starting point guards’ new look.

Lowry was playing at the NBA Africa Game along with several other Raptors players, and he was looking leaner than ever.

If it was just one picture it may have been an optical illusion, but in virtually all documentation of that game, Lowry definitely looks leaner than ever.

While there is obviously no direct correlation between weight and playing ability, it does suggest that Lowry has been putting in some serious work this offseason. And the fans, well they are already assuming this means that Lowry will be better than ever.

Skinny Lowry > everyone else pic.twitter.com/G8CBDCyuL0

SKINNY LOWRY IS BACK THANK THE LORD