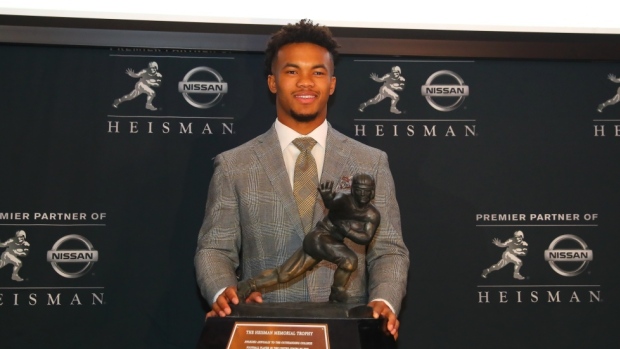 Kyler Murray is a rare talent, and he’s going to make sure that he gets paid like it. The Oklahoma quarterback and this year’s Heisman Trophy winner was also the ninth overall selection of last year’s MLB Draft, which puts him in a strange position as the entry deadline for the 2019 NFL Draft approaches — he could go in the first round of that one, too.

So, now Murray has to make the decision of which league to go pro in. To use a third sport for metaphor, the ball is firmly in the court of his MLB team, the Oakland A’s. They’ll have to meet his price, and it’s a lofty one.

Generally, drafted players in the MLB play on a rookie contract with a salary set by the team, generally near the league minimum, while they develop in the minor leagues. However, Murray has some rather unique leverage here with the option to switch sports, and ESPN’s Jeff Passan reports that the A’s will seriously consider offering him a major league contract at the amount he’s bargaining for.

Major League Baseball would waive a rule that prevents teams from giving major league contracts to recently drafted players if Kyler Murray and the Oakland A's can strike a deal that would have him choose baseball over football, league sources told ESPN.

During a meeting in Dallas today, the possibility of Oakland guaranteeing money in addition to Murray's $4.66 million signing bonus was raised, sources tell ESPN. To do so, Oakland would need to add Murray to its 40-man roster. He still could develop in the minor leagues.

Still: The notion of a player who has never taken an at-bat in the minor leagues winding up with a big league deal shows how special a situation Kyler Murray's is. It's not just the Oakland A's invested in him. It's Major League Baseball, too. Murray in MLB would be a coup.

This is obviously a lot of money to hand over to any rookie baseballer, but the A’s are obviously reticient to lose their first-round pick, especially since they wouldn’t get a compensatory pick in the 2019 draft if Murray chose football. It’s just too bad that he can’t take the Bo Jackson path and play in both, but with the complexity and training of both leagues these days, that’s seen as all but impossible.

The A’s front office, helmed by Billy Beane, will make the final pitch, and then we’ll see what happens. The NFL’s deadline to announce for the draft is Monday.