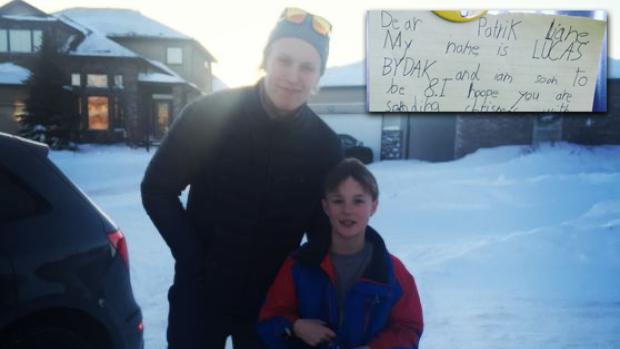 Patrik Laine may currently be unable to bring joy to Jets fans on the ice since he's still sidelined with an injury, but the Finnish forward is still doing his best to keep Jets fans happy off the ice.

On Christmas day the uncle of a young Jets fan named Lucas tweeted out his 8-year-old nephew's letter to Patrik Laine. In the letter Lucas wished Laine a Merry Christmas, as well as extended a personal invitation to the Jets star to attend his birthday party.

The uncle expressed that it was "worth a shot" in the shared tweet and he was oh so very right. Laine was unable to make it to Lucas's birthday party, but he was able to drop by the Jets fan's house with a number of special gifts.

Special delivery by a special hockey player for a special nephew! @PatrikLaine29 wasn't able to make his party but this will do 😉 #GoJetsGo pic.twitter.com/4wLAHPm1IZ

Professional athletes are sent personal requests from loyal fans on a daily basis, making it easy for some of those requests to get lost in the shuffle or even ignored. So it's pretty awesome to see Laine go above and beyond to provide a young hockey fan with a moment he'll surely never forget.

Also nice to see that the uncle who shared the letter and jokingly stated that he was a "#VeryJealousUncle" got a special gift of his own from another Finnish Jets legend.

Breath in, breath out @marcopolo_1979 ...my favourite @NHLJets @TeemuSel8nne likes a tweet about my new favourite Jets @PatrikLaine29 player pic.twitter.com/qU5Todvl2o