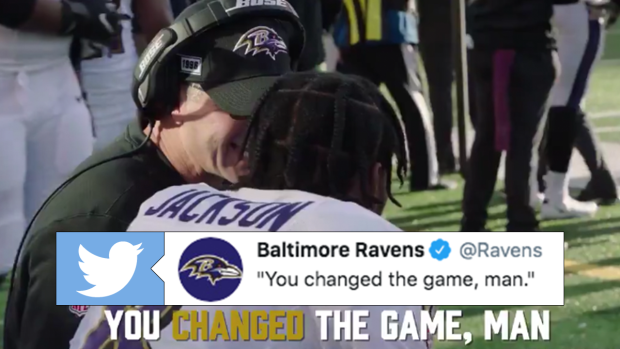 The relationship between coach and quarterback is one of the most important relationships in football. When the relationship is truly clicking, you can bet your bottom dollar that the rest of the offence is too. Just ask Tom Brady and Bill Belichick.

A new budding relationship may be the one between Baltimore Ravens coach John Harbaugh and his young star quarterback Lamar Jackson. In what has been an incredible breakout season for the multi-faceted weapon that is Lamar Jackson, the Ravens are cruising atop the AFC North division. Part of this can be attributed to the trust Harbaugh has in his pivot, and the unselfishness of Lamar Jackson.

Both those qualities were on full display on during an incredible mic'd up moment between the two. With Lamar cruising to yet another impressive victory, Harbaugh took the time to chat with his budding star.

Just an awesome moment between player and coach 👏

That's the sort of relationship Ravens fans will love to see. Their coach showing his appreciation, and their quarterback showing his maturity and willingness to sacrifice personal stats to win.

Oh and for the record, this coach/quarterback duo is the only duo that's managed to beat the legendary Brady/Belichick duo so far this season.