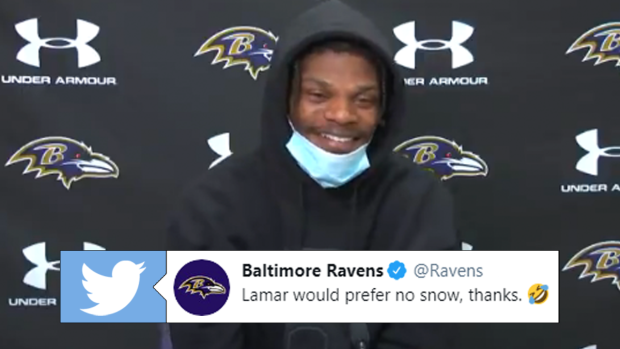 Coming off an MVP season last year, Lamar Jackson didn’t get the start he wanted this season. It seemed as though defenders had figured out Jackson and the Baltimore Ravens offence, but towards the end of the year it became clear Lamar still had the “cheat code” gene.

This weekend, we may get to see a Lamar we’ve never seen before: Snow Lamar!

The Baltimore Ravens are heading to Orchard Park to take on the Buffalo Bills. As is the nature of Buffalo, the game is shaping up to potentially be a pretty snowy one. While Bills quarterback Josh Allen has encountered the snow before, it will be Jackson’s first experience in the NFL.

Is he excited? Well, not exactly…

Lamar would prefer no snow, thanks. 🤣 pic.twitter.com/NJOXCQB16J

“Zero experience” playing in the snow… except for a snowball is Louisville. Throwing a football is BASICALLY like throwing a snowball anyway. Just aim for the teammates and not the guys in white, blue, and red.

Realistically, Lamar does half his damage on the ground anyway. While it’s likely going to be a slippery affair if it snows, he may be able to take advantage of a game that shies away from passing plays.

Then again, Josh Allen is no slouch on the ground either.

Someone in the organization, get one of those machines that make snow, and put it all over the practice field this week, just Incase.

I don't know.. if they can't throw the ball much and have to rely on the ground game, we're in a massive advantage.