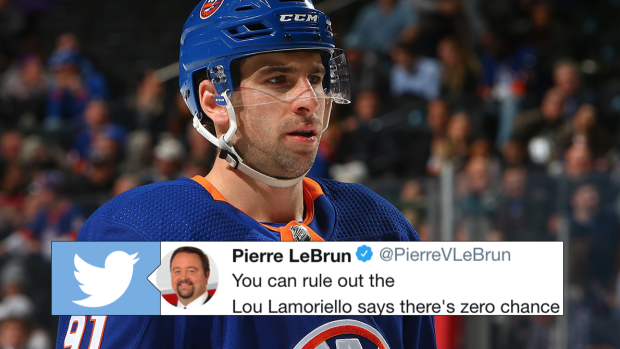 It's officially silly season, also known as the offseason, in the NHL and the reason we're calling it 'stilly season' is because there are some big names that are (or could be) free agents and trade rumours involving some of the biggest names in hockey.

On Thursday, however, we learned that one big name won't be traded and as per Pierre LeBrun, that big name is John Tavares.

You can rule out the sign-and-trade scenario involving John Tavares. Isles boss Lou Lamoriello says there's zero chance he would do that. So either Tavares stays put or goes, but it will be a traditional transaction either way. Lamoriello hopeful of course that JT stays put

For any teams that were interested in bringing in Tavares by way of a sign-and-trade, Lou Lamoriello has apparently made it known that there's no chance of that happening.

At this point, it seems like the Tavares saga will end in one of two ways, he signs a long term deal with the Islanders or he tests the market and leaves in free agency.

Nobody has any idea what Tavares is going to do at this point, but it's clear the Islanders are doing everything from a front office/coaching standpoint to entice JT to stay.

Per @ddreger2016, #BarryTrotz and the #Islanders are closing in on an agreement for Trotz to be the Isles next head coach