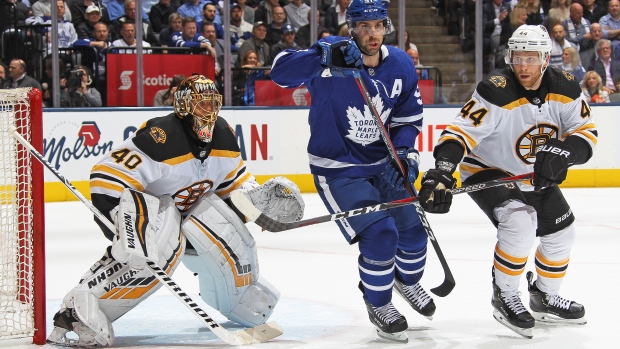 Playoff hockey can provide a tense atmosphere, as well it should. Sometimes, though, when things boil over and get nasty on the ice — see: Jake DeBrusk’s hit on Patrick Marleau, Nazem Kadri’s cross-check on DeBrusk and subsequent suspension — that can lead to beef between the teams’ respective fanbases, too.

Nothing wrong with booing the team bus as it rolls into the arena, but to continue enjoying the game on a lighter note, members of the Leafs and Bruins Reddit boards decided to strike a friendly bet.

"Myself and another member of the r/BostonBruins community decided to reach out to the r/leafs community and start a friendly gamble: For every game the Bruins won, anyone who was in would donate to Toronto Sick Kids. In return, for every Leafs win, fans would donate to Boston Children's Hospital. The Leafs community met this idea with an overwhelmingly positive response, proving there is a bit of humanity in us all. We're all fans of the same sport when you strip away our team loyalty, and what's better than to bring something positive out of a rivalry? I'm overwhelmed by the outpouring of support from people on this, and I'm so excited to see where we can take it.

At the time of writing, the post has reported over $2,000 in donations from Reddit users -- it's turning out to be an awesome way for some fans to follow the games.

Maybe for as long as that’s the case, we should just root for a seven-game series. Things have certainly been pretty even so far, with the Leafs taking a 2-1 series lead in Game 2 — thanks in part to some crucial blocked shots from Mitch Marner at the end of the game.