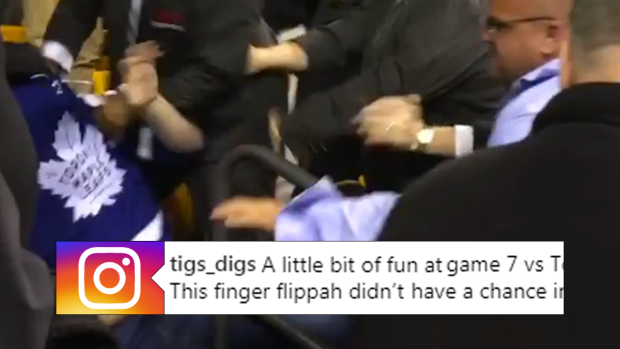 There were several groups of Toronto Maple Leafs fans in Boston last night and none of them had a particularly good night, but this guy had to have the worst.

Assaulting someone is never the right response to an obnoxious fan, we’re never surprised to the results of actions like the ones taken in the video below. When you’re in an opposing fans building, flipping people off after taking a Game 7 loss, some is probably going to take exception. Boston seems like a particularly no-nonsense fanbase, so this probably isn’t the best idea.

@barstoolsports A little bit of fun at game 7 vs Toronto. This finger flippah didn’t have a chance in lodge 6. Poor guy shoulda stayed in his seat. @nhlbruins

He should have brought these fans with him and maybe they could have prevented things from escalating. At the very least he could have at least got his fanbase a power play if they were around.

Wait for the reaction! The Maple Leaf Square refs reviewed the goal 😂😂