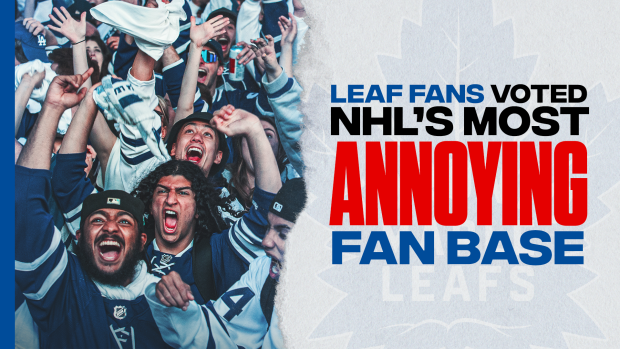 Which team do you think has the most annoying fans in the NHL?

This shouldn’t come as much of a surprise but according to a recent survey conducted by JFreshHockey, that included over 6,500 people, Buds fans came in hot at number one as the most annoying fans in the NHL. The New York Rangers followed in the number two spot while the Montreal Canadians finished at number three.

More than 6,500 of you answered the fanbase survey. Here are the results.

Which NHL team has the most annoying fanbase?

Don’t worry Leafs nation, the fun didn’t stop there either. You were also voted the most delusional…

Which NHL fanbase is the most delusional?

And the most prone to melting down, which is totally understandable given the team’s recent playoff success.. or lack of.

Which NHL fanbase is most unhinged and prone to melting down over next to nothing?

But hey… here’s one kind of redeeming result?

Which NHL fanbase isn't as annoying as its reputation?

Okay, so we’ve established that the Leafs have the most unbearable fan base in the league (per the survey of course, but which one is kind of sliding under the radar? Apparently the fans over in Carolina can be a thorn in the tush.

Which NHL fanbase is low-key more annoying than they get credit for?

As for the best fans in the league? Chalk up another W for those Colorado Avalanche.

Which fanbases are other teams' fans particularly fond of?

Check out JFresh’s entire thread for every result you can think of pertaining to fan bases. Which team do you think has the most annoying fans in the league?