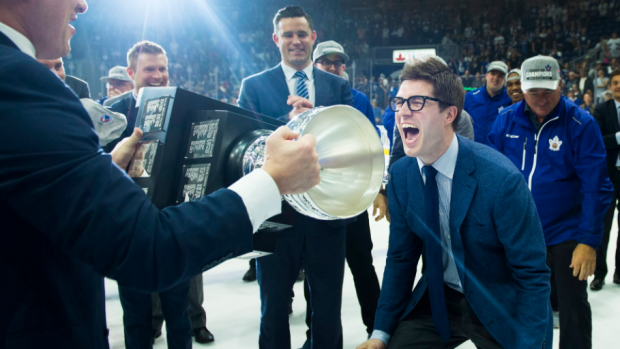 It took seven games, but the Toronto Marlies are the 2017-18 Calder Cup Champions.

The Marlies defeated the Texas Stars 6-1 in Game 7 of the Calder Cup Finals to win the championship for the first time in club history.

Andreas Johnsson scored a pair of goals and added a helper, and was named MVP of the Calder Cup Playoffs, as the Marlies became the 9th Canadian team in history to win it.

Following the game, players and members of the Marlies organization, as well as member of the parent club Toronto Maple Leafs, made their way out onto the ice to lift the AHL Championship.

One of those executives was the 17th general manager in the Toronto Maple Leafs franchise, Kyle Dubas, who assembled the championship winning squad when he was still GM of the Marlies.

After countless hours spent overseeing the team, Dubas ended his stint with the Marlies with a championship, something Leafs fans hope they can see him do at the NHL level.

Check out genuinely happy Dubas is by lifting the Calder Cup.

You ain’t kidding. And I love that shit...and him. Also prolly buying a Marchment jersey now pic.twitter.com/MPGlmMGUk1

I asked Sheldon Keefe about Kyle crying. He broke down a little talking about him.

“I wouldn’t be here today without him. He’s been with us every step of the way.”

It's the first championship by a professional hockey team since the Toronto Maple Leafs won the Stanley Cup back in 1967 with only six teams in the league. Dubas isn't the only member of the Marlies to make the jump to the big club next season. It's expected that Travis Dermott will hold a full-time roster spot, while Andreas Johnsson and Carl Grundstrom should be in contention to land a roster spot on the Leafs opening night roster.