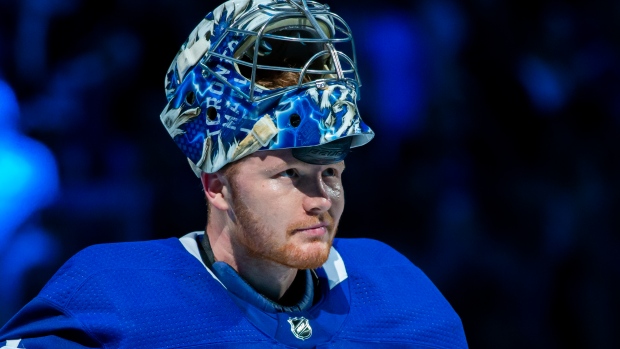 Police are seeking Frederik Andersen of the Toronto Maple Leafs as a robbery suspect, or at least so in this new commercial from Bauer Hockey. A masked thief with “catlike” reflexes, the commercial also features footage of Andersen stealing a number of would-be goals with the glove.

There have been reports of a robbery...

Although the Leafs’ season ended earlier than they would like, Andersen was a workhorse in net this year, becoming the team’s all-time leader in goalie wins with 38. While facing the most shots-against of any goalie this season, you can be sure that Andersen made a number of robberies.

In fact, even after the end of the Leafs’ season, Andersen has kept at it. Leafs fans would sure love to see more of the body of work that produced this gem for Team Denmark at the IIHF World Championships.

Freddy #Andersen makes a ridiculous save to keep the game tied in the 3rd. Denmark would go on to beat Germany. #IIHFWorlds

Only one question remains: Will the force’s top cop, Sergei Bobrovsky, be on the case against Andersen?