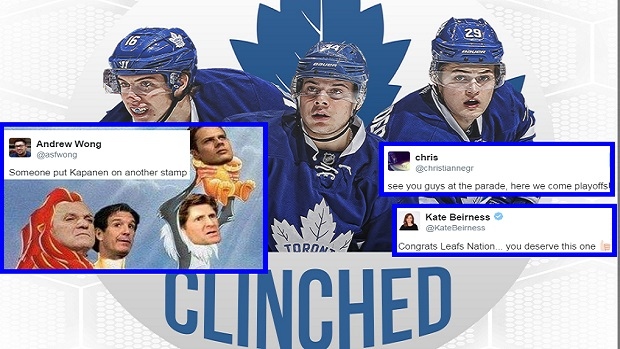 The past decade has been one to forget for the Toronto Maple Leafs, but their new batch of rookie superstars has given the team new life.

The #MapleLeafs are in! The @mapleleafs clinch a playoff berth after defeating the Pittsburgh Penguins 5-3!

Considering this was just supposed to be another year of the rebuild for the team, Leaf fans from far and wide were taken by surprise when they saw just how good and consistent their young crop of players are.

It's been a memorable year so far for the @MapleLeafs, but the fun is just getting started. pic.twitter.com/Arb956UFRx

With the team clinching their first playoff berth in a few years, you can bet fans were beyond ecstatic once their boys in blue officially locked up that postseason spot.

The buds are back in the postseason!

Kapanen, Brown and Matthews. The rookies do it again.

Congrats Leafs Nation... you deserve this one 👍🏻

Leaf fans have been waiting a very long time for this, so you can bet they’re going to be celebrating this victory all night long.

I've been holding on to this for weeks... Leafs are finally PLAYOFFS BOUND!!! #MapleLeafs #Playoffs #LeafsKing #HakunaMatata #MeansAustonMatthewsIsABeast

Tonight is for the haters. #tmltalk

This kid is my spirit animal right now. #TMLTalk pic.twitter.com/hy2FonsPTc

see you guys at the parade, here we come playoffs! #tmltalk

Someone put Kapanen on another stamp #TMLtalk #goleafsgo

The team most people counted out at the beginning of the season clinch the final wildcard spot for the Stanley Cup playoffs, thanks in large part to the young 3 amigos!!! #Toronto #MapleLeafs #NHL

The Maple Leafs gave their fans a bigger scare than needed, but they got the job done and they’re off to the postseason and that’s really all that matters.