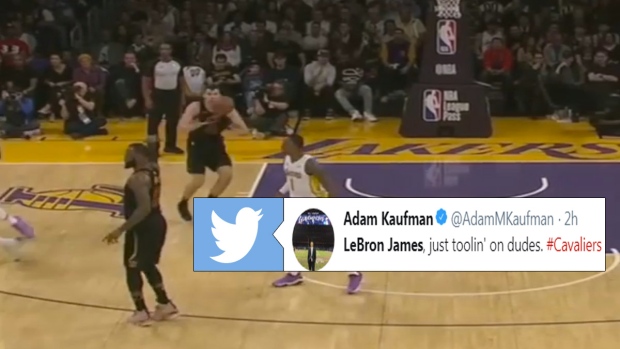 LeBron James has been a human highlight reel since he made his NBA debut back on October 29, 2003, and even when we think he’s already done it all he goes out and pulls off some sort of ridiculous play we’ve never seen before or adds his own touch to a routine play to make it look even better.

The Cleveland Cavaliers visited the Los Angeles Lakers on Sunday night and King James pulled off one of the nastiest no-look passes you and everyone you know has ever seen.

Lakers center Brook Lopez thought he had James all figured out and was about to get an extra step on Kyle Korver before Korver even got the ball in his hands, but the four-time NBA MVP burned Lopez and the rest of the Lakers defence with a ridiculous no-look pass to a wide open Ante Zizic.

LeBron posted a team-high 24 points, 10 rebound and 7 assists, but the Cavs came up short as the Lakers dominated them 127-113.