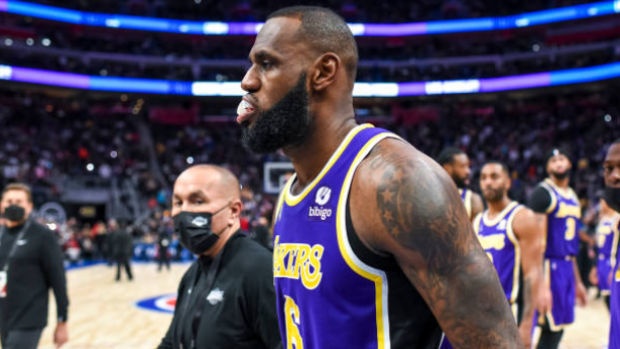 Ooooooooo, did things ever get SPICY in Detroit on Sunday night! Right at the centre of it all was Los Angeles Lakers star and NBA poster boy LeBron James.

James ended up in the middle of a brouhaha when he committed a vicious foul against Detroit Pistons big Isaiah Stewart. The swinging fist left Stewart with a bloody right eye, and it caused an emotional reaction from Stewart that ended up getting him ejected from the game (and suspended for two more).

While the foul was certainly deserving of a Flagrant 2 – which it got – LeBron is maintaining that it was inadvertent. In fact, after the game LeBron reportedly tried to get ahold of Stewart’s phone number to apologize and explain that it wasn’t intentional.

It was ABSOLUTE CHAOS in Detroit last night Shams.

We may never know, but we’re curious to see what happens when these two teams meet next. We won’t have to wait long, either. The Lakers and Pistons are set to meet again on November 28th, and both player’s suspensions will have been served by then.